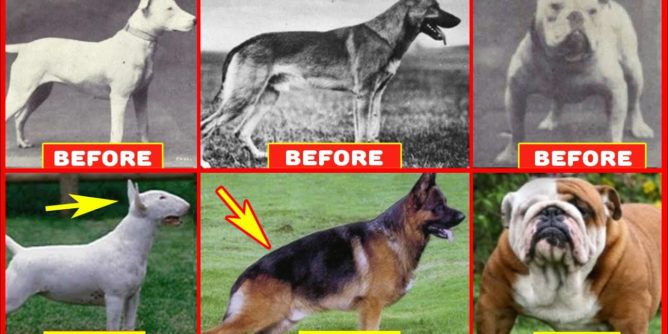 In this video, we will discuss how years of selective breeding and human influence have drastically changed and damaged some of the most popular dog breeds.

The Pug
The Pug has been selectively bred to feature an extremely flat face and curly tail.
Pugs’ pushed-in face makes them susceptible to breathing difficulties, low oxygen levels, overheating and dental problems.
Pugs’ desirable double-curl tail is actually a genetic defect that results from their spinal deformity. It often causes back pain.
Cavalier King Charles Spaniels
Years of breeding for a prettier head has resulted in too small of a skull in Cavaliers.
This means their skull is too small for their brain. As a result, their brain squeezes through the opening leading to the spinal cord, causing pain and sometimes facial nerve paralysis.
The bull terrier
The Bull Terrier’s head have transformed drastically over the years due to serious impaired breeding.
In the past, the bull terrier had a slim torso and well-proportioned head.
But modern bull terriers have an egg-shaped head and thick body. Because of their unnatural head shape, they suffer from dental problems as they have too many teeth in their enlarged jaws. These dogs also picked up mental deficiencies such as a habit of compulsively chasing their tails.
Dachshund
Dachshunds were originally used to hunt rabbits, foxes and other tunneling animals.
Thanks to altered breeding, their back has stretched out and their legs have shrunk to a point where they can hardly maneuver over obstacles a few inches off of the ground.
These changes have made Dachshunds at huge risk of intervertebral disc disease and spinal damage which can lead to paralysis.
English bulldog
Today, Bulldogs’ unnatural proportions make them incapable of mating or giving birth without medical intervention.
These dogs also suffer from overheating and breathing problems because of their pushed-in face.
Boxer
Earlier in their existence, Boxers had pointy ears and long snouts. But today, they have floppy ears, and flatter noses that are more compact.
Their shortened snout is a cause of some serious breathing problems.
Modern Boxers also have more flesh in their mouths so they don’t pant as efficiently. This means they overheat more quickly.
Poodles
Originally, the Poodle was considered a water-retriever, meaning they were used to retrieve water-birds and ducks for hunters, mainly because they had a water-resistant coat. Poodles had long, stranded coats that almost resembled braids.
However, years of selective breeding has drastically changed the shape and texture of their fur.
Today’s Poodles suffer from a skin disease called Sebaceous adenitis.
Loss of fur, scaly patches, and itching to the extent of pulling out hair are common problems for many poodles.
German Shepherd
Before evolving to fit modern standards, the German Shepherd was considered to be a medium-sized dog with strong legs, a deep chest and straight back.
Today, the German Shepherd is much heavier, and features a back that slopes drastically, making them prone to hip dysplasia — a condition where the leg bones don’t fit properly into the hip socket.
The Basset Hound
Researchers have determined that the Basset Hound’s short legs are a result of an extra copy of a certain gene, which produces growth protein.
Prior to this genetic mutation, the Basset Hounds had smaller ears and a less droopy face.
Unfortunately, these changes have made the breed suspectable to many health problems. Their excessive skin can lead to dermatitis in the skin folds. Their droopy eyes are prone to serious eye problems, and their short legs can cause spinal problems.
The St. Bernard
St. Bernards were originally used to rescue lost travelers buried by snowstorms and avalanches.
today’s St. Bernards have bigger skulls and a more squished-in face and longer fur.
They now suffer from a variety of health issues such as overheating and entropion, a condition in which the eyelid is rolled inward against the eyeball.
The Bearded Collie
Modern Bearded Collies are shorter and much stockier than they used to be. Many Bearded Collies are prone to skin allergies.
The White Terrier
After years of genetic alteration, today’s White Terrier is not nearly as athletic as its ancestors. Their coat has become longer and their legs have been stunted. This has made them very susceptible to luxating patella, a condition in which the knee cap moves out of its natural position.
Chow Chow
It is believed that the Chow Chow dates back to 206 BC of the ancient China because of the similarities found in Chinese potteries.
However, today’s Chow Chows developed a drastically dense coat and excessive skin, which results in reduced peripheral vision, and sometimes, skin allergies and coat issues
Salukis
Salukis originated in the Middle-East.
Archeologists have even uncovered mummified Salukis in ancient Egyptian tombs. The Saluki is now suspectable to heart defects and certain eye problems.