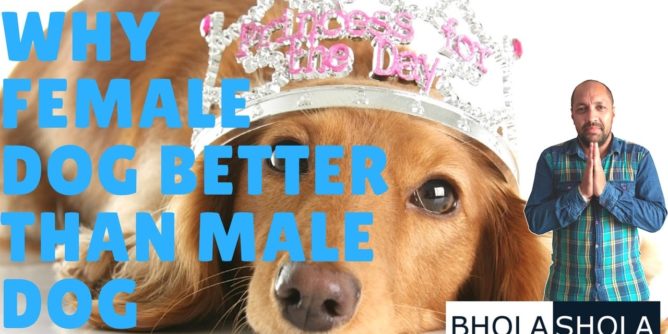 Pet Care is a pet awareness initiative by Harwinder Grewal. Who is an owner of Grewal Pet Shop and Farm, Main Road, Adampur. In this video, he tells about Why Female Dog Better Than Male Dog in the Hindi Language.

1. The behavior of a dog will depend on how it is raised and trained as a puppy. Some dogs are more affectionate or aggressive than others because of the environment in which they were raised. The decision of whether to get a male or a female puppy is entirely dependent on the preference of the owner-to-be.

2. The behavior of a dog may depend on its training, but the sex of a dog can dictate its ability to learn from that training. It is a fact that a female dog is smaller in size and tends to reach maturity faster than the male dog. Its early maturity gives it an advantage when it comes to training. This does not mean that the female dog is more intelligent than the male dog. It only means that the female dog will be easier to train than a male dog of the same age because it is more mature.

3. The female dog comes into estrus two times a year. Also known as the “heat” cycle, this season will last about two weeks or as long as three weeks. During this period, the female dog produces a bloody vaginal secretion that acts as a lure for male dogs.

4. The non-neutered male dog, on the other hand, tends to be more dominant and high-spirited. He has an innate urge to dominate other dogs that are smaller, and will sometimes try to dominate his owner as well. A weak owner can easily be dominated by a large male dog. Male dogs are also more independent than female dogs, so it is very important to start obedience training as soon as he is ready to be trained.

5. The battle of the sexes is not limited to humans after all. Some believe that the male dog is more affectionate and easier to train, while the female dog is more aggressive and protective of its owners and puppies. Well, the truth is that when it comes to dogs and puppies there is no superior sex. The qualities cited above are just the anecdotal observations of many dog owners. There is no study that has proved any general truism that a dog will behave a certain way because it is male or female.

6. If you do not want your female dog to breed during her heat cycle then you must keep her locked inside or isolated from any male dogs. It is also best to keep her locked in an area where the floors are not carpeted to so that her bloody discharge will not stain the carpets.

7. Spaying has been shown to lower the risk of ovarian or uterine diseases in most female dogs. It is also believed that spaying has positive effects on the behavior of a female dog. It has been observed by many that female dogs have a better temperament after they have been spayed, often displaying much less aggression and becoming mellower. Needless to say, spaying also prevents accidental or unwanted pregnancies, so it is important to make sure you take care of it as early as possible if you do not want to breed your dog.

Thanks for watching our video. Please like this video if you liked it. Also, subscribe to our channel here: https://www.youtube.com/BholaShola