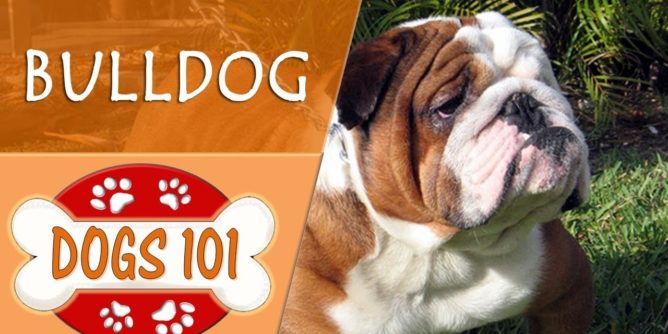 Check out More at BrooklynsCorner.com

The Bulldog, with its exceptional facial features, is one of the most popular dog breeds in the US. It owes its origin to the sport of bull baiting, which had been popular in Europe, beginning around the 13th century and right up to the 1800s. These dogs were needed to hold on to a bull by the nose for long times, not letting go of the grip despite suffering terrible physical torture from the bull. To achieve this, dogs with stocky bodies and powerful jaws were bred over centuries. The first mention of the Bulldog in English writing is from the 1600s. Belying expectations of the breed dying out after bull baiting was outlawed in Britain in 1835, its fans continued to breed it to retain its distinctive features, but with a more amiable temperament. The breed’s continued existence was also helped by its increasing use in the US in less nasty activities like rounding up city cattle. The modern Bulldog was obtained by crossing the old English bulldog with the pug, to get a shorter, wider dog, with a shorter muzzle. Funnily enough, the Bulldog as we know it today is hopelessly unsuited for the physical strain of fighting a bull.

Time for some Ruff Trivia:
– Which famous Englishman was sometimes also called the British Bulldog?
o A: Charles Darwin
o B: William Shakespeare
o C: Winston Churchill
What do you think, give it your best guess in the comments below before we get to the answer! Hang on tight and we’ll get back to this Ruff Trivia Question toward the end of the video.

The adult Bulldog’s height is generally between 12 to 15 inches. The male weighs between 45 and 55 pounds, with the female being a little lighter. Some noticeable physical features of the dog are its large head, prominent under bite, short muzzle, pointed teeth, and round, black, wide-set eyes. The folds above the nose are known as rope. The tail is naturally short, and is either straight or screwed. The coat is of fine texture, and is short and close. The colors seen are white, black, bronze, brindle, gray, red, fawn, or some combinations of these.

Grooming: The Bulldog’s coat is easy to take care of. Weekly brush using a glove or a soft brush should do the trick. However, the folds on the body and under the neck can trap dirt easily and need to be wiped more regularly. Many bulldogs drool, and area around the jaw needs to be wiped too. Trimming nails, checking ears for wax build-up and brushing teeth are other regular requirements.

Environment: Aggression has been bred out of the breed over the years, to produce a family-friendly dog that loves children. It gets along nicely with other pets and generally with other dogs as well. Not the best natural watch dogs because of their friendly nature, they can be trained to separate friends and family from strangers.

Training: The Bulldog is a fairly intelligent breed, and can be obedience trained easily, despite a slightly stubborn nature. A walk on leash is generally sufficient daily exercise, and physical exertion is best avoided. But, it is important to strike a balance in the exercise department, as the breed is also prone to obesity, which can cause stress on joints.

Health: The life expectancy of a healthy Bulldog is 10 to 11 years. Leading causes of death are heart related ailments and cancer. Hip dysplasia has a relatively high occurrence. The dog cannot stand hot weather, and if you stay in a temperate or tropical climate, it should be kept indoors during the day. More than 80% of births are through C-section, because their large heads get stuck in mother’s birth canal.

A loveable, gentle dog, the Bulldog works very well as a home pet. Known to love curling up in its owner’s lap rather than go out to play alone, it is perfect if you live in a city apartment and looking for a dog easy to care for.

Find out if the Bulldog would be a good addition to your home. Now you can visit Brooklyn’s Corner.com to take our quiz and find out which dog would be the best match for you.