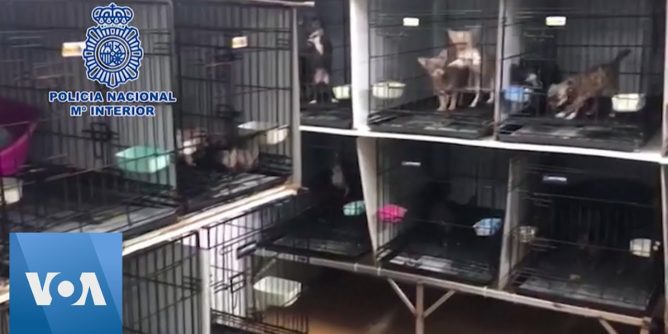 Spanish police rescued 270 small dogs, many crammed inside cages and in poor health, and arrested five people after raiding two illegal puppy farms on the outskirts of Madrid, Thursday, January 23.
—————————
READ MORE: Among the group, mostly Chihuahuas and Pomeranians, police found two dead animals whose frozen bodies had been wrapped in newspaper. Police said the breeders had cut some of the dogs‘ vocal chords, possibly to prevent them from barking and alerting neighbors.

Two of the five people arrested were veterinarians, whom police alleged helped give the operation a veil of legitimacy by providing stamped certificates and fitting the dogs with identification microchips.

The group had become one of Europe’s largest distributors of Chihuahuas and Pomeranians, and sold dogs across Spain, using social media to market the animals. Police believe the group generated profits of more than $2.22 million over more than a decade in operation.

The dogs, many of them found three-to-a-cage in cramped suburban basements, are now in the care of various animal charities, awaiting a court decision on their fate. (Reuters)