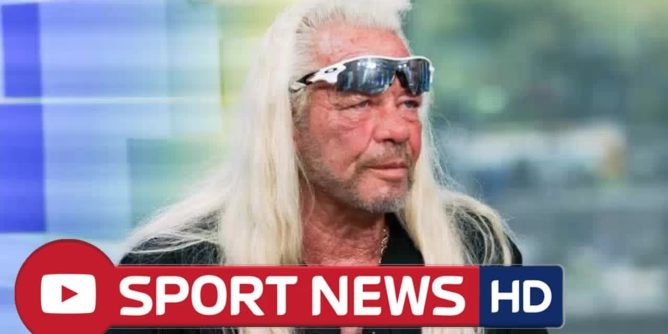 Getty  Duane Chapman, also known as “Dog the Bounty Hunter”, has had a lot to deal with over the past year. He watched as his wife, Beth Chapman, battled cancer and ultimately succumbed to the disease. And recently, he had his own brush with death, as he has been diagnosed with a pulmonary embolism, and he revealed the news on The Dr. Oz Show.  According to Dr. Oz, Chapman was refusing treatment for his heart condition, that he knew he needed. Dr. Oz revealed that Chapman’s wife had always helped taken care of him, so, three months after her death, Chapman was on his own to make decisions about his life. Dr. Oz said, “[Duane] was fearful. Beth had been his north star. She was the one that would go with him and keep him balanced so he could deal with these things. Losing her took away his biggest support.” Chapman went on to say that he realized he needed to take care of himself for his family, using his late wife as his guide. Chapman explained, “I said, ‘What would Beth do. What would she say to you? I don’t think she’d be happy with what you’re doing. You’re throwing away your life, you’re throwing away your ability to parent your kids. You have to man up.’ That’s what she would say.” Dr. Oz called Chapman a “ticking time bomb”.Doctors Discovered a Blood Clot in Dog the Bounty Hunter’s Lungs In short, someone with a pulmonary embolism has blood clots in their arteries. But, this isn’t Chapman’s only problem. He revealed to ET Online that doctors discovered a blood clot in his lungs as well. He then said, “Eight minutes after I had the test on the heart, she (his doctor) took me into the room where they check blood clots and then said that on my lung I have a huge blood clot. The reason for the blood clot was thick blood. The next step is blood thinners — 98 percent of blood thinners work on the blood clot.” According to the Mayo Clinic, a pulmonary embolism “is a blockage in one of the pulmonary arteries in your lungs. In most cases, pulmonary embolism is caused by blood clots that travel to the lungs from the legs or, rarely, other parts of the body … Because the clots block blood flow to the lungs, pulmonary embolism can be life-threatening.” Symptoms of a pulmonary embolism include chest pain, shortness of breath, a cough that may produce blood, leg pain or swelling, a fever, sweating, dizziness, discolored skin, or an irregular heartbeat.Dog the Bounty Hunter Was Hospitalized for Chest Pains  People reported on September 16, 2019 that Chapman had been hospitalized for chest pains. “I can confirm Dog is under doctor’s care and is resting comfortably. Thank you for all of your well wishes — keep ’em coming.” TMZ first reported that Chapman was taken from his Colorado home to a nearby hospital. At the time, there was speculation that Chapman could have suffered a heart attack or could need surgery.  Chapman’s self-diagnosis was since his wife died, “I had a broken heart,” as he told KDVR. Chapman Is Trying to Quit Smoking Because of his poo