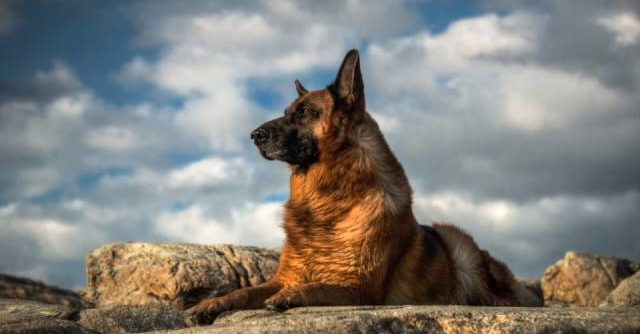 The German Shepherd, originated in Germany is a medium to large sized dog, probably one of the most recognized dog breed in the world. It was initially used for herding sheep, but due to its intelligence, loyalty, trainability and strength, the German Shepherd has gained itself a reputation of an all round dog. Today, this breed is being used in different roles like, for, search and rescue, police and military, disability assistance, guard roles and many others. They make great companion dogs.

History :
In the mid 18th century a need was realized to have breed standards. In those days there was no real categorisation to differentiate the breeds. All the herding dogs were considered the same. Max von Stephanitz, an ex-cavalry captain, played a great role in the development and recognition of the breed, today known as the German shepherd. Von Stephanitz wanted to create a German breed, that would be unmatched as a herding dog. In the year 1898, after his retirement Von Stephanitz, started studying about the English breeding techniques. He travelled and attended many dog shows across Germany in search of the perfect working dog, which embodied all the different traits like, intelligence, athleticism and obedience.

In 1899, while visiting a dog show Von Stephanitz, was shown a dog named HektorLinksrhein. He was very impressed with the power, intelligence and loyalty of the dog and immediately decided to purchase it. Von Stephanitz, later renamed the dog as Horand von Grafrath. He was so impressed with the dog, that he soon formed a society – Verein fur deutsche Schaferhunde (Society for German Shepherd dogs). Horand was the first ever registered dog of German shepherd breed.

As the industrialization grew, the need for these herding dogs declined. But their strength and intelligence was noted and they were given a chance in the military. During World War I, the German shepherds played a vital role as messenger dogs, rescuer, guard and supply carriers.

Appearance :
The German shepherd is a medium to large sized dog. This is a strong, agile and muscular breed with heavy and dense hair coat. The German shepherd always carries the expressions of, intelligence, alertness, loyalty and fearlessness. It can look intimidating but has a sensible brain on his head. The breed has a long muzzle with a characteristic black colour on it. The jaws are strong and have a scissor-like bite. The almond-shaped eyes are brown and lively, with the ears being large and erect. The German shepherd has a slightly longer neck. Whenever the dog gets excited, it raises its head and lowers it, while moving at a fast speed. The tail is bushy. Most of them have a characteristic black blanket type of hair coat on their back, leaving the legs, some portion of the neck and head and inner part of the tail.

Temperament :
The German shepherd is a highly intelligent and confident dog breed. They are job oriented and love to be busy performing some activity or work. The high level of intelligence and willingness to learn makes the German shepherd highly trainable. Their curious and suspicious nature makes them excellent guard dogs. They are reserved with the strangers and don’t make friends with them quickly. A German shepherd, if not trained and socialized properly, can become over protective towards their family and territory.

Along with their characteristic features of, strength, endurance, intelligence, obedience and loyalty, the German shepherd has fitted itself to many roles, like search and rescue, police and military dogs, disability assistance, criminal tracking, explosive detections and many more. This highly intelligent dog breed can quickly learn new things and interpret instructions better than many other breeds. The German shepherd has great sense of smell and concentration. It can work for hours without getting distracted. They are very good in smell tracking and chasing activities.

Health :
The German shepherd is generally a health dog, but it can be affected by some health issues. Not all German shepherds get affected by these diseases, but it is good to know about them, if you are wishing to have them as your companion dog.

Some of the common health issues include Hip dysplasia, Von Willebrand disease, Exocrine pancreatic insufficiency (EPI) and Elbow Dysplasia. The German Shepherds are prone to ear infections as their ears do not have hair on outer ear canal to prevent moisture and other infectious parasites or bacteria. Preventive measures must be taken, if the dog is diagnosed with hip or elbow dysplasia, as it could further lead to arthritis.